Local Partner: Damnok Toek NGO
Collaborations: Goutte d’Eau Foundation – A Child Support Network
After a feasibility mission carried out in December 2018, and after having dedicated the whole 2019 to the deepening of the project opportunities in the country, from January 2020 the Don Carlo Gnocchi Foundation began operating in Cambodia in partnership with the local NGO Damnok Toek, an organization active for more than 20 years in the protection of vulnerable children and with specific projects of taking care of disability in two residential facilities in Neak Loeung - 60 km south-east of the capital Phnom Penh - and in Kep, in the southern province of Kampot. 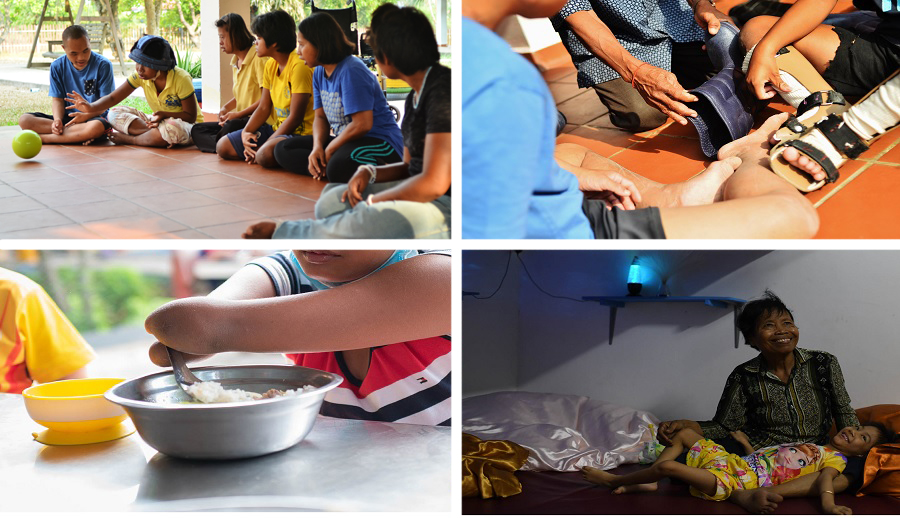 Cambodia has undergone remarkable economic development in recent years, with one of the highest annual growth rates of GDP - equal to 7% - and a very low level of unemployment which stood at around 1%. Some data, on the other hand, help to grasp the contradictory nature of this development path: Cambodia stands in 146th place for the Human Development Index (UNDP, 2017), the infant mortality rate under 5 years is 29 / 1000 (UNICEF, 2018) and more than 20% of the population still does not have access to drinking water sources (WHO, 2018). Finally, despite the most recent radical social and economic changes, Cambodia still faces deep scars of history: throughout the national territory it is estimated that between 3 and 4 million unexploded landmines are still present, which every year cause a thousands of accidents with often permanent consequences.

Social-health policies and the provision of services in Cambodia are still heavily influenced by aid from abroad and, very often, the international organizations themselves and NGOs present in the territory directly take charge of them. The needs of the local population are many, starting from the most basic ones. An even more evident situation concerns the taking charge of disability in the country, mostly entrusted to private associations and NGOs, local and international. Cambodia is estimated to have around 630,000 people with disabilities (3,8% of the population), more than half of whom are under 20 years old. In 2011, a Disability Law was launched, which so far seems to have found little application in concrete reality. There are no specialist degree courses dedicated to speech therapy, occupational therapy, special education. Across the country it is estimated that there are only 400 professional physiotherapists.

(Unless otherwise noted, the photos are © Damnok Toek courtesy of Lee Bartran and Miguel Jeronimo)

Awareness and training on disability issues and... (Leggi tutto)